Nordea Bank Museum is located in the Union Bank of Finland's Old Banking Hall at the address Aleksanterinkatu 36 B, Helsinki. Completed in 1898, the building was designed by architect and professor Gustaf Nyström. Its exterior features 11 reliefs designed by sculptor Walter Runeberg. The building was used as a bank branch until 1936. Photo: Kasakka Media.

Open to groups on weekdays as agreed.
Open doors once per month.

There is a fully-furnished bank interior designed by architects Gesellius, Lindgren & Saarinen on display at the museum. Dating back to 1904, the interior is a valuable specimen of cultural heritage. Part of the old banking hall and the manager's office are open for visitors. Banking memorabilia collected from a variety of commercial banks add to the historic atmosphere.

The museum's permanent exhibition includes an exhibition on the history of Finnish commercial banking starting from the establishment of the Union Bank of Finland in 1862. The exhibition focuses on the customer's point of view and showcases the banking services available to the customer.

There are memorabilia on display from each of Nordea's predecessor banks: a share certificate, bank book, piggy bank or some other object or piece of equipment that was used in the bank. The exhibition also features rare banknotes issued by the Union Bank of Finland in 1866 and 1882.

The museum's collection includes a multimedia exhibition, which showcases the evolution of banking technology as well as the branches of Nordea's predecessor banks. You can watch their old television commercials starting from the 1960s.

Nordea's Finnish predecessors pioneered in the new way of banking and where therefore closely watched by the rest of the world. The idea behind Nordea's Netbank was born when TELESYP was launched in 1979. Today's mobile services date back to the 1980s. This is when the Union Bank of Finland developed its first telephone bank and envisaged banking services which could be used anywhere and anytime.

Regular ATMs and payment ATMs played an important role in the transformation of banking. They taught customers to use self-services and to value the accessibility of services. New technologies and the internet enabled the development of netbank and mobile services. Solo became a buzzword, which other banks´ customers also used when talking about internet banks.

At the beginning of the new millennium, Nordea's Solo internet bank was internationally renowned and attracted plenty of customers. In 2004, Nordea had more than 4 million customers using the internet bank, making it the world's largest internet bank measured by the number of payments. Nordea's top position reflects the bank's pioneering role and early efforts to develop brand new services.

Sustainability is embedded across Nordea's business strategy. For more than 200 years, we've played a key role in supporting and growing the Nordic economies.

Financial skills have an impact on sustainable development.

Nordea's history in Finland begins with the establishment of the Union Bank of Finland, the first commercial bank in the country. The Senate approved the bank's license on 21 May 1862 and the bank began its operations in July the same year. 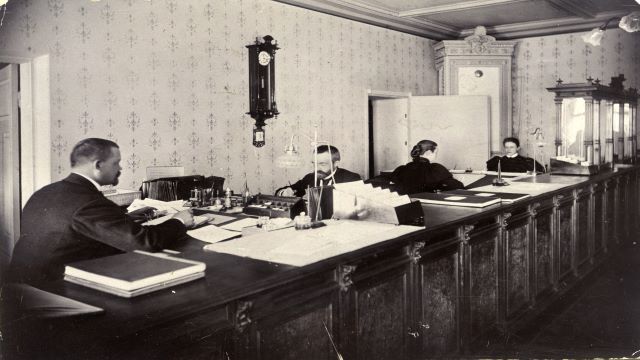 In total, Nordea's family tree in Finland consists of 25 commercial banks. Finnish family tree includes three other main banks in addition to the Union Bank of Finland: Kansallis-Osake-Pankki, Helsingin Osakepankki and Suomen Työväen Säästöpankki (STS-pankkiOpens new window). Finland's first savings bank is also part of Nordea's history as the successors of the branches of Savings Bank of Turku were merged with the Union Bank of Finland when it acquired Suomen Säästöpankki in 1993. Though this, Nordea's oldest roots date back to 1822 in Finland.

The Union Bank of Finland and Kansallis-Osake-Pankki merged in 1995. They formed a new bank called Merita, but another merger was just around the corner. In 1998, Merita and the Swedish Nordbanken merged establishing the MeritaNordbanken Group. 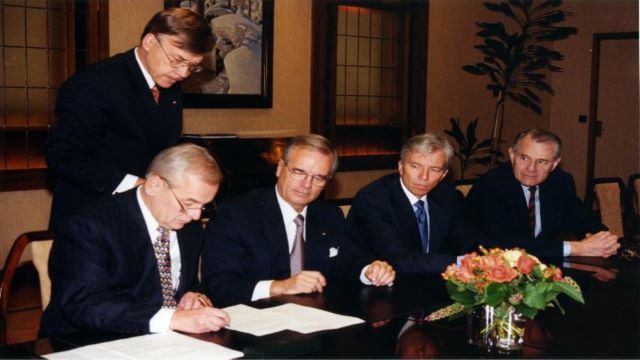 Photo: Signing of the MeritaNordbanken merger agreement on 13 October 1997. Photographed by Ilkka Leino.

The new name Nordea was adopted in the late 2001. At the time, the Danish Unibank and the Norwegian Christiania Bank og Kreditkasse had also joined the Group.

In Scandinavia, Nordea's predecessor banks include some of the oldest banks in the Nordic countries, such as Sparekassen for Kjobenhavn og Omegn (Denmark, founded in 1820), Wermlandsbanken (Sweden, founded in 1832) and Christiania Kreditkasse (Norway, founded in 1848).

The Union Bank of Finland (UBF) was established during a time when political tensions eased and there was more freedom to conduct a business, which contributed to the transformation of the Finnish economy. At the time, there was no Limited Liability Companies Act or banking laws in Finland, so the establishment of the bank was modelled after other countries.

The purpose of founding the Union Bank of Finland was to finance agriculture, industrial production and trade as well as to manage payment traffic. The bank had rented four rooms for its head office in the House of Nobility and began its operations there in July 1862. 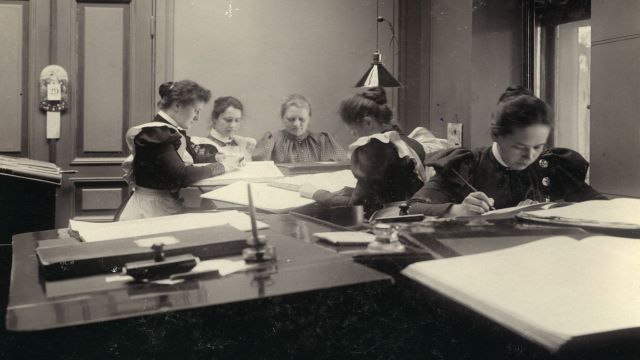 In the same year, the bank expanded its operations by opening seven branches and three customer service offices. Branches were set up in towns where at least 2,000 banking shares had been subscribed for. These included Vyborg, Loviisa, Turku, Kuopio, Hämeenlinna, Tampere and Vaasa. Porvoo, Mikkeli and Oulu had to settle for customer service offices. The first branch started off as one-man operations, as banking was usually a secondary activity for the bank manager.

In the early 1870s, competition for the Union Bank of Finland began to appear. The most significant competitor early on was Nordiska Aktiebanken för Handel och Industri (Pohjoismaiden Osakepankki Kauppaa ja Teollisuutta varten), which was founded with German capital and headquartered in Vyborg. The Union Bank of Finland and Nordiska Aktiebanken merged in 1919. The bank created as a result of the merger was called Pohjoismaiden Yhdyspankki. In 1975, the bank re-adopted its original name. 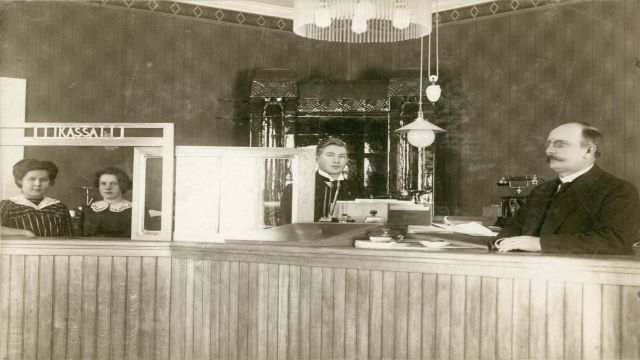 The foundation for establishment of Kansallis-Osake-Pankki (KOP) was laid in the spring of 1889, when Fennomans gathered at the Helsinki Finnish Club with the aim to make banking services available in Finnish. In order to raise equity capital for the new bank, the Fennomans recruited advocates who collected names to share registers in secret meetings. As a result, a total of 1,152 people entered shares in the register.

The bank began its operations on Saturday 8 February 1890 as it opened its branch at Aleksanterinkatu 17. In the early stages, creating a Finnish banking vocabulary proved especially challenging since the previously founded banks offered services in Swedish only.

Although Kansallis-Osake-Pankki only stared off with one branch for banking license reasons, its goal from the start was to become a national operator. After a few months' delay, the bank opened branches in Turku, Hamina, Tampere, Viipuri and Oulu. The bank continued to expand its branch network and branches began to pop up in rural areas, too. In the late 1800s, Kansallis-Osake-Pankki had established branches in Hämeenlinna, Kuopio, Pori, Kemi, Käkisalmi, Heinola, Iisalmi, Mikkeli, Rauma, Vaasa, Kajaani, Raahe, Rovaniemi, Maarianhamina, Salo, Joensuu, Jyväskylä, Lahti, Hanko, Porvoo, Savonlinna and Nurmes. 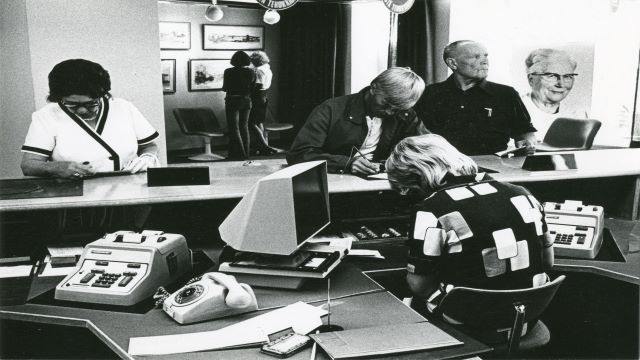 Helsingin Osakepankki (HOP) was established in 1912 and first opened its doors to the public on 2 January 1913. Originally, banker Emil Winckelmann negotiated funding for the bank with Marcus Wallenberg, Manager of the Swedish Enskilda Banken. As a result, the bank was founded, and Winckelmann became the bank's first manager. The good industrial growth outlook in Finland at the time most likely explains Wallenberg's interest in such an investment. 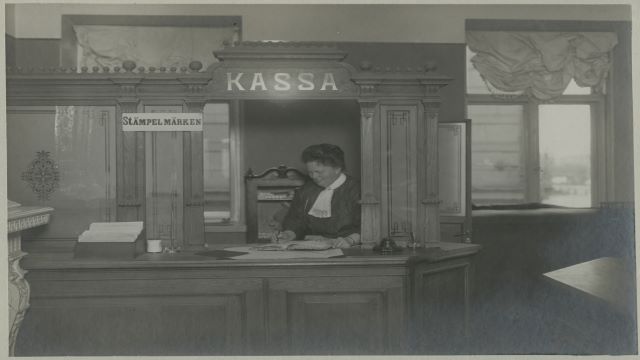 The history of Helsingin Osakepankki was characterized by a number of mergers with small local commercial banks. As a result of the mergers, this local bank that originated from Helsinki grew into a national wide commercial bank. Many of the acquired banks were operating in the Swedish-speaking coastal regions, which strengthened Helsingin Osakepankki's position among Swedish-speaking customers. 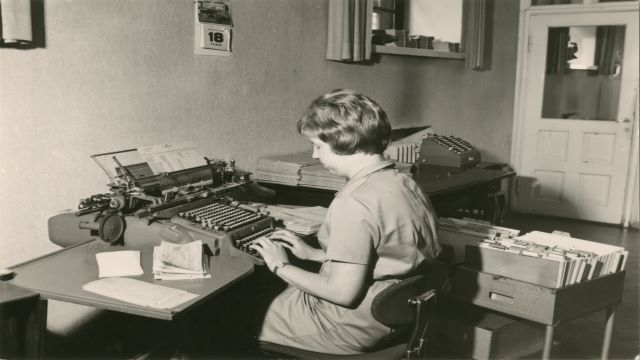 You can see Nordea's history in Finland illustrated in the chart. Click the image to enlarge the chart. 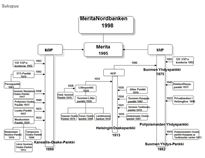 Abbreviations used for the banks:

If you want to read more about history of Nordea's predecessor banks in Finland, see the reading list below. The most recent book Erehtymättömät by Markku Kuisma and Teemu Keskisarja, was published in 2012.

Books about the bank's history:

The bank museum's collection showcases the history and developments of commercial banking in Finland from the 1860s till this day. The collection of objects reveals the technical progress of the tools commonly used by businesses.

The historical objects at the museum comprise objects from the Finnish commercial banks which merged with Nordea's predecessor banks. The oldest objects date back to the founding days of the bank. The collection includes memorabilia from all of the predecessor banks across Finland. Some of the objects are work-related utilities and others business gifts given to the bank, but there are also some objects which were donated to the museum.

The museum is not systematically adding to the collection and only accepts objects used at the bank or gifted to the bank as donations if their background can be verified.

Nordea's old photos have been scanned and they are stored in the photo archive of Central Archives for Finnish Business Records (ELKA). The photo archive features photos from Nordea's predecessor banks from the late 1800s to the 1900s. There are approximately 8,500 photos in total.

You can browse the photos by visiting ELKA's websiteOpens new window.

Clic "Haku" at the top of the page to open the search page:

· Enter the bank's name (for example KOP, SYP or HOP) in the field called "Freetext".

· You can also filter the search results by time and location.

· Tick the "Image" box and press the "Search" button to start the search.

You can get more tips on how to use the search function by hovering over the question mark icons (in Finnish). The photos in the archive are for browsing only. You can request high-resolution photos and permission to use them from ELKA.

You can find more information about Nordea's history and the museum by visiting the Our history page at nordea.com and the WikipediaOpens new window-page of Nordea Bank Museum.